The incident occurred during a morning meeting of the Alcoholic Beverage Board of Marion County.
Provided/Indianapolis Channel 16 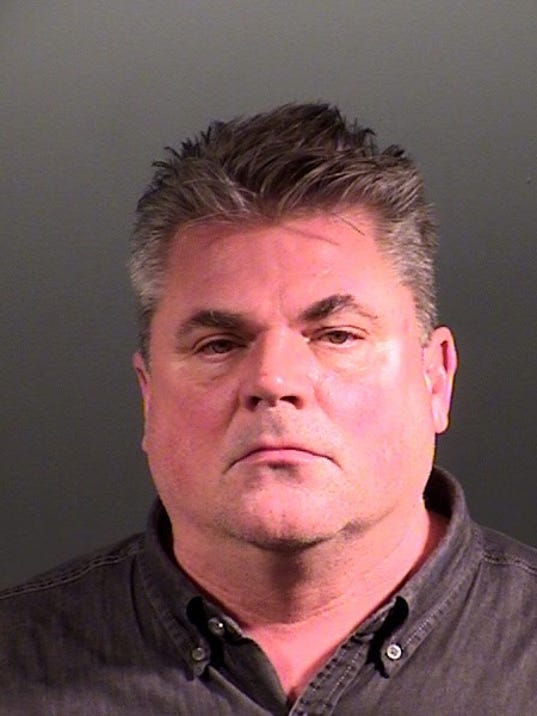 The owner of a Indianapolis strip club is accused of attacking Indianapolis councilman Jeff Miller during a public meeting Monday in an act of retaliation over Miller’s yearslong opposition to the bar’s liquor license.

Police say Jeffery Moe, 51, grabbed Miller by the throat with both hands, picked him up and slammed his head against a wall. Moe later told police he “cleaned (Miller’s) clock and I’ll do it again,” according to court documents filed Tuesday.

But Moe, a former Iowa Hawkeyes basketball player in the 1980s who faces two felony and two misdemeanor charges, disputes how the attack was characterized by police. Moe told IndyStar he grabbed Miller’s collar and shook him.

“I did not grab his neck. I shook him,” Moe, who owns Lenny’s Gentlemen’s Club, told IndyStar. “I was not intending to injure Mr. Miller. I was meaning to tell him to stop being a pompous politician.”

He was a second-round pick by the Utah Jazz in the 1988 NBA Draft but never played in a regular season game.

The alleged attack occurred during an Alcoholic Beverage Board of Marion County meeting around 10:30 a.m., court documents say.

After the altercation, Miller told police that his breathing was restricted. His glasses were also broken.

Investigators found scratch marks and redness along Miller’s neck, according to court documents.

Neither man attended Monday’s meeting to discuss Moe’s alcohol license. Instead, they were on opposite sides regarding a license for Liquor Barn, which is down the street from Lenny’s in the Old Southside neighborhood.

Moe said he wanted to support Liquor Barn because Miller was trying to steal the business’ liquor license just as he’s tried to steal the strip club’s.

That dispute dates back several years.

In late 2014 or early 2015, according to appeals court documents, he applied for a renewal of the club’s permit to serve alcohol.

In a March 2015 hearing, Miller was among a group of people to testify against the renewal.

Surveillance video recorded from a residential property near Lenny’s was used during that hearing. It showed someone pointing a gun into the air and firing shots, and another person selling items out of a trunk.

Attendees said they felt unsafe because of what spilled out of the bar.

“We’re seeing impact on the neighborhood,” Miller said at the time, according to a video recording of the meeting. Miller’s council district includes a number of Downtown neighborhoods.

The alcohol board rejected the renewal of the permit. Then the Indiana Alcohol and Tobacco Commission rejected an appeal, with an officer calling the club a “public nuisance” that “threatens the health, peace, and morals of the citizens of the state,” according to court records.

On Feb. 20, the appeals court affirmed the lower court’s decision, supporting the alcohol commission’s decision to deny a liquor license.

In his interview with IndyStar on Tuesday, Moe downplayed concerns about safety. Police runs to his bar have declined since he took ownership, he said.

Lenny’s also hasn’t been hit with any excise violations, he said.

“I’ve turned that business around more than any other business,” Moe said.

He’s been under attack by local government because of a “religious shakedown,” he said.

But now Moe also has a pending assault case stemming from Monday’s incident.

In an interview following the attack, police said Moe called Miller a “child molester” — a reference to the pending felony charges against Miller, who has been accused of fondling two girls in his Fletcher Place home. His case is under review by a special prosecutor.

“I gave him my version of Ride the Wild Jeff Beast,” Moe told IndyStar.

Ride the Wild Jeff Beast is the name of a game of piggy-back rides that Miller would give the girls in his home, according to court documents.

Moe said Miller denigrated his name during a February meeting with local business leaders, leading Moe to feel upset as he entered the alcohol board meeting Monday.

He said Miller should not be able to criticize Moe’s character while also facing child molestation charges.

When contacted by IndyStar on Tuesday, Miller said he’ll let the investigation run its course and declined further comment.

One attendee of Monday’s meeting, who asked not to be named, said Moe and Miller had not been talking prior to the attack. Instead, the attendee said, Moe abruptly “rushed across the room” to attack Miller.

“It was unbelievable,” the person said.

Afterward, Miller was checked out by paramedics and released.

Moe was arrested Monday and released from jail around 3:30 a.m. Tuesday after paying a $7,500 surety bond, according to jail logs and court records.

“One good thing about America is that I will have my day in court,” Moe said.

From preseason all-rookie to out of the league

The following is from a 2012 Register story by Rick Brown about the 1986-87 Iowa basketball team, which had eight players on the roster drafted by NBA teams. Seven different players played in at least 29 regular-season NBA games.

Jeff Moe was selected by Utah in the second round of the 1988 draft, the 42nd player taken.

Moe played for the Jazz in rookie camp, and made the all-rookie team.

“I called my agent and said, “Give me my money. I was an all-star in the rookie camp. Tell me how much I’m going to make,’ ” Moe said.

“I’ve got your contract, but no money is guaranteed,” Moe recalled. “He said, “just go out there and play hard.’”

Moe went to camp with the Jazz, and figured he’d make the team until he attended a team dinner after the first night of practice.

“They had a great team,” Moe said. “I started counting. John Stockton, I don’t think they’re going to cut him. Karl Malone, they’re not going to cut him. Thurl Bailey, Bobby Hansen, Mark Eaton, I went down the line. And I think, “Oh my God,’ they’re got 14 guys under contract. This doesn’t look good.”

Moe played in one preseason game, against the Los Angeles Lakers, and was cut the next day.

“They knew they were going to cut me,” Moe said. “So they made me team captain. I got to meet Magic Johnson, and shake his hand. Kareem (Abdul-Jabbar), too. The next day they gave me my ticket home.”

Moe, a 6-foot-4 guard, played one season in the CBA and another in a 6-4 and under league, then gave up professional basketball.

“Those guys who play professionally, they earn every penny,” Moe said.