Jakkar Kinard is accused of sexually assaulting a woman during a Halloween-night party hosted by Mercyhurst University baseball players.

After being arraigned Thursday, Jan. 4, on charges of sexual assault and indecent assault, Kinard was committed to Erie County Prison on $25,000 bail, according to court records.

His preliminary hearing on the charges is set for Jan. 17, court records state.

Kinard is no longer a student at Mercyhurst, defense attorney Farley Holt told The York Dispatch.

According to charging documents, Erie Police were called to the college’s public-safety building about 2:30 a.m. Oct. 31, where a woman told them she’d been raped at a party held at a house on Pine Avenue where Mercyhurst baseball players live.

Holt described it as the team’s house, basically.

The allegations: The woman told police Kinard, who she knew as “Karr,” had sex with her in a bathroom there.

She said she blacked out after drinking alcohol and doesn’t remember how she wound up in the bathroom, or how her pants ended up getting pulled down, documents state.

She said the first thing she remembers is Kinard having sex with her while she was bent over, and that Kinard’s hands were keeping her bent over, charging documents allege.

Jakkar Kinard enjoyed a standout football career at York Catholic. He signed to play NCAA Division II football at Mercyhurst College in Erie, but is no longer attending Mercyhurst. (Photo: The York Dispatch)

He admitted having sex with the woman, and said the woman’s friend pulled the woman away from him because the friend thought the woman was drunk, documents state.

Those documents also allege Kinard told police he knew the woman was drunk and had seen her “stumbling” around the party.

Erie Police did not return a phone message seeking comment.

‘It was consensual’: Holt, who represented Kinard in his York County assault case, said he also will represent Kinard in the Erie County case.

“As far as my client was concerned, it was consensual,” Holt said. “In fact, she initiated the sexual contact.”

Holt said prior to having sex, the woman was “grinding” her buttocks against Kinard’s crotch in what the attorney described as a lap dance.

“Both parties apparently had been drinking,” Holt said, but Kinard didn’t think the woman was so drunk that she didn’t know what was going on.

“I feel confident I’m going to vindicate him,” the attorney said.

York County case: Kinard was accused in May of participating in the robbery and assault of an acquaintance in York Township. 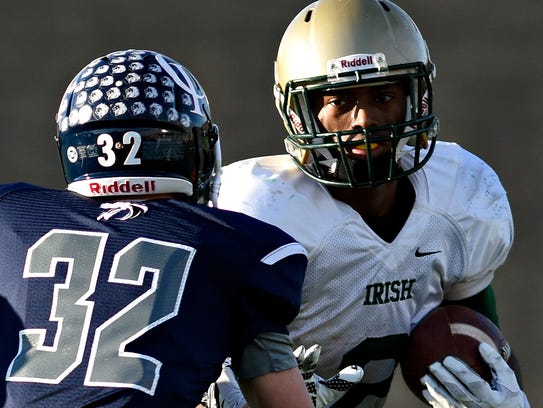 Kinard pleaded guilty in York County Court on Dec. 27 to the summary offense of disorderly conduct. He was fined $100 and ordered to pay court costs.

Summary offenses are akin in seriousness to traffic tickets.

As part of his agreement, charges of simple assault and harassment against him were dropped. Robbery charges filed against him was withdrawn in June at Kinard’s preliminary hearing.

Holt called his client’s plea “an obvious compromise” and said Kinard shouldn’t have been charged with anything because he wasn’t involved in what happened.

Standout player: Kinard helped York Catholic to possibly the best season in the school’s history. The Irish finished 10-2 in 2016, which included York-Adams Division III and District 3 Class 2-A championships.

That fall, Kinard led the York-Adams League in rushing for the second consecutive year, totaling 2,071 yards and scoring 23 touchdowns.

In two-plus seasons, Kinard finished with 3,594 yards in his career for York Catholic.

— Reach Liz Evans Scolforo at levans@yorkdispatch.com or on Twitter at @LizScolforoYD.